The CSV import process is much more difficult with SSIS than it was for DTS. Scanning the MS newsgroups it looks like many of the problems will be corrected in SQL Server 2008. That's a long ways off, so let's look at some of the issues and how we can solve them.

The first problem is that there are commas enclosed by quotation marks in the Address field. SSIS will put BedRock as the PhoneNumber and StoneAge as the InvoiceAmount. This is very easy to solve. In the properties window of the Flat File Connection Manager, you will see a textbox labeled "Text qualifier." Just put a quotation mark in that field and it will see that the address column contains commas. 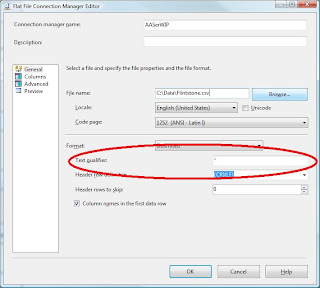 The next issue is that record #3 does not have the appropriate number of columns. It is one column short. DTS would handle this by inserting NULLs in the missing fields and then moving on to the next record. SSIS chokes on this. It will attempt to put "Mister Slate" in the InvoiceAmount field of record #3.

To solve this issue, I wrote the following script. I had to write it in VB.NET, since SSIS does not allow C# quite yet.


Originally, I put a call to DTS.Events.FireInformational to tell us how many records have completed processing. It turns out that calls to DTS.Events are very, very slow. I removed those lines and processing was much, much faster.


I recently imported a CSV file with very dirty data. It included fields that will stretch across multiple rows and fields with quotes in the data. After struggling with SSIS, I finally decided to write my own CSV importer. As I was beginning my project and doing CSV research, I stumbled upon this project, called "A Fast CSV Reader."


I used this code, along with a SQLBulkCopy object from DotNet 2.0. It imported 9 million large rows of dirty data in just a few minutes. I was amazed. What cleaning it didn't do, I will do in a SPROC.

Here is the extent of the code I wrote myself: